Oh, my! Surely they're not serious...

10 points to the first person who finds the punchline on this site:

Found via How to Spot a Psychopath.
Posted by Bern at 8:34 PM 1 comments

...that one in seven pregnancies end in miscarriage?

I didn't, but that's the number the obstetrician gave us when telling us the bad news on Monday afternoon.

It's kinda weird, but many people seem to think that miscarriages are something to be ashamed of, and you should never let anybody know - and thus the "don't tell anyone you're pregnant until 12 weeks" meme, as the vast majority of miscarriages happen in that first trimester.

On the other hand, I know someone who did that, only to have a miscarriage at twelve and a half weeks.

On the gripping hand, the obst. said there is absolutely no impediment to a second attempt, which is likely to be successful rather than otherwise. In fact, he said he frequently has patients who fall pregnant within a few weeks.

It seems it's just a natural part of things - when everything isn't going *just* right, the mother's body recognises this and shuts down the pregnancy, to conserve resources and to allow a later, likely-to-be-successful pregnancy to happen as soon as possible.

I was reading an article while sitting in the waiting room in a New Scientist mag from a few weeks ago. The article was about micro-RNA, the role it serves in cells as messengers and the means of expression of genes in DNA. Fascinating stuff, apparently it has the potential to allow for extremely effective vaccines that can be precisely tailored to kill a particular virus. Or even cancerous cells - initial clinical trials have begun!

A friend said to me a few years ago, that he fully expected life spans to be extended into the centuries range within 50 years. And he intended to be around long enough to see that happen - thus his careful attention to diet & exercise.
Posted by Bern at 1:38 PM 1 comments

So, how was your weekend?

I got to go driving up to Noosa to measure some noise. On a Saturday evening.

Ah, well. It could have been one of those "must be measured between 1 and 4am on a Sunday morning" type jobbies, so 8-9pm on a Saturday isn't so bad.

But we stayed at Anf's mum's place Saturday night. After the noise measurements, I took some photos.

This is Jupiter, and three of it's moons. I have no idea which ones. A check of any decent ephemeris would tell you (or one of those funky diagrams that have sinusoidal lines that will tell you the relative positions of the moons on any given night). It's pretty over-exposed, so you can't see the cloud bands on ol' Jove, sorry. 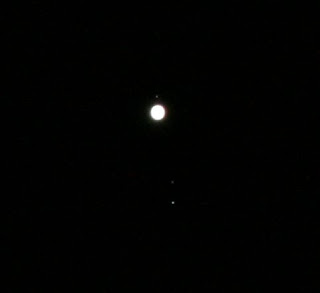 I had hoped to take a bunch, and stack them to give a better view, but that requires taking underexposed images for each frame. Could be worse, it could have turned out like my pic of Omega Centauri (i.e. a big blurry mess). Maybe I should try that one when there isn't a first-quarter moon in the sky? :D (hint: moonlight washes out dim astronomical objects, such as the aforementioned Omega Centauri, which, as the name suggests, is the 24th-brightest object in the constellation Centaurus).

I'm sure you can figure out what this one is. 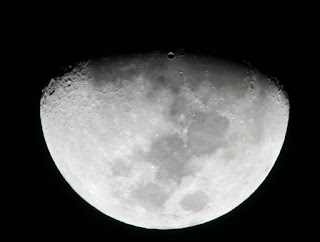 And here are some of the local birdlife, taken the next morning.

Starting with a plover & it's four chicks: 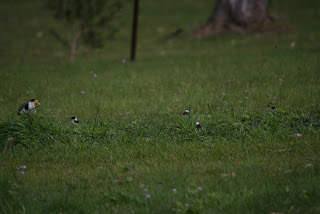 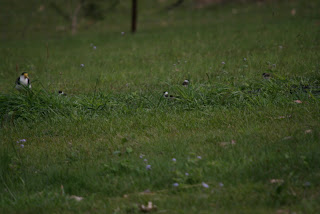 And a rainbow lorikeet perched in a gum tree, after it finished getting stuck into the grevillea flowers: 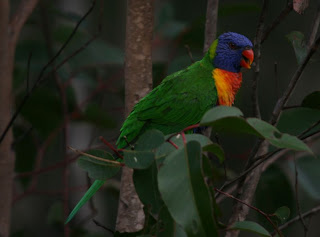 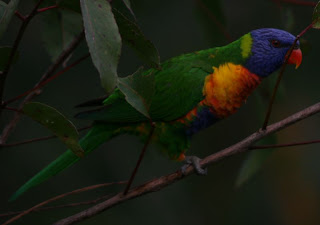 So, that was my weekend. Mostly.

Ah, well. At least I was able to measure the noise I went there to measure. Nothing more annoying than giving up your night/weekend/both to measure something, to have it pour rain, or the neighbours are having a rave, or both. In this instance, I was able to demonstrate that we reduced noise levels by close to 25dB for a noisy refrigeration compressor. That's a lot, in acoustic-speak. Normally, we're happy with a 10dB reduction, so to get 25 is very good.
Posted by Bern at 10:50 PM 1 comments

Posted about three weeks ago, it seems.

I found it via an article on Groklaw.

Edit: Here's a link to the Youtube page where I saw it. There's an option just below the video window to view in high definition, I highly recommend you try it.