Here's my latest timelapse of the 300 George St construction site.

Hahaha! Yet another demonstration of the cluelessness and lack of scientific literacy of many climate 'sceptics'.

Here's some quotes from the article summary, with my comments after.

Reality: Such gases radiate, i.e., “scatter” or spread out the light they absorb, thus releasing light in all directions rather than blocking it.

Real Reality: Well, no. They absorb the IR. They do then re-radiate it in all directions, but that's a different physical process to scattering. Look it up sometime...

Assumption Two: Blocking the exit of light while allowing free entry will increase the temperature of an irradiated object.

Real Reality: Um, are you perhaps familiar with the law of conservation of energy? You're effectively stating that Same energy in + less energy out = No Change in Temperature. Claiming that the only reason temperature increases is because convection is blocked, is like claiming the Titanic wouldn't have sunk if it wasn't for all that water in the ocean.

The obvious next question - what makes a sceptic think that climate scientists don't consider convective heat transfer when figuring out the response of the Earth's atmosphere to greenhouse heating? And if convection can 'carry away' all that heat, where does it go, other than into the Earth's atmosphere?

This is easily answered by actually looking at what climate science says. Oh, look, amazing, climate scientists include a convective heat transfer term... just look at the figure showing the heat balance in this article. Here's a link to just the figure. Here's the figure itself: Climate sceptic fail.
Posted by Bern at 10:32 AM 0 comments

This is a student project so the correct unit of energy is a "Library of Congress Stacked with Red Bull Instead of Books."

Now, you may convert that into Joules, if you care to.

I couldn't pass up that challenge...

Doing the sums, I made the following estimate.

For comparison, a kiloton of TNT releases 4.184 terajoules, so a Library of Congress of Red Bull contains the equivalent of about 13.25 kilotons of TNT - about 1 Hiroshima Bomb, give or take.

A taste of the future?

Headline from a news story this morning:

Now, some of you will say "that's weather, it's got nothing to do with climate change". And you'd be right, mostly.

The difference is that, in a warming world, we can expect that extreme heat waves (and the forest fires that go along with them) will become more common. Already, record high temperatures are more than twice as likely to be broken as record lows. The last winter in Europe & the eastern US brought very heavy snowfalls & low temperatures. It was the coldest January in the UK for 23 years, according to the UK Met Office. At the same time, it was unseasonably warm over much of the Arctic, & the northwest US & western Canada (remember the problems they had with not enough snow for the winter olympics? They had to truck it in to some venues!).

The NOAA says that the January to June 2010 period was the warmest 6-month period on record. June 2010 is the warmest June on record, and is the fourth month in a row to set an all-time record.

Indications of a warming trend? Well, not in isolation, no - there's too much variability in weather for climatic trends to be statistically significant for anything less than about 15 years worth of records. However, it's certainly consistent with a warming trend. And if we go back far enough to get that statistical significance, there is quite a definite trend, so it's more appropriate to ask: "are current temperatures indicating any change from the previously established warming trend?" The answer is a categorical no. If anything, the current temps are tending toward an increased warming trend. There's definitely no evidence whatsoever that global warming is showing any sign of slowing down, more the opposite.

Back to heatwaves, the more serious implications are raised by this post on Skeptical Science. There comes a point where the human body is unable to shed heat, and body temperature starts to rise. At that point, you'd better have somewhere cool & air-conditioned to hide, or heat stroke is just a matter of time (just look at that Russian contestant in the Finnish sauna competition - 6 minutes in a 110º sauna, and he keeled over and died).

So we're looking at some nasty consequences for our high-carbon diet over the past few centuries. (And those forest fires & peat fires are releasing even more carbon!)

A nice analogy I saw on another post on Skeptical Science: if you crash your car into a concrete wall at 80km/h, there's a small chance you'll walk away with just a few bruises. But is that any reason to drive straight at it?
Posted by Bern at 11:33 AM 0 comments

Sourdough bagels, that is.

Had one this evening with dinner.

Had a decent dinner, so was feeling quite full when I was done.

But I still wanted another bagel... 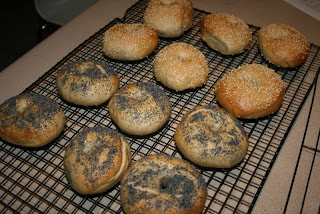 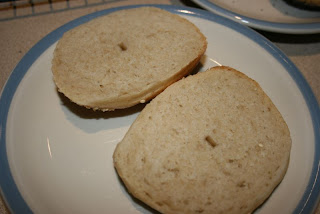 I'm getting the hang of this...

This week, I didn't want to waste a lot of flour/water by feeding the starter every day, so I fed it on Sunday night & plonked it in the fridge. Left it there until Friday, when I pulled it out and give it another feed. It had developed plenty of fine bubbles over the five days, but not quite as many as it had previously developed in a 12-hour period. 4-5ºC will slow things down a bit, which was the intended outcome.

After a day out on the bench (in some much cooler weather for Brisbane, ~15-20ºC), it was nice and bubbly again, so I gave it another feed to bulk it up on Saturday night, and made the loaf on Sunday morning.

It's still a bit time-consuming to make a sourdough loaf, but it's satisfying at the same time. Flour, water, and salt were the only ingredients, plus some sesame seeds scattered on the top. (Yes, I remembered the salt this time!) 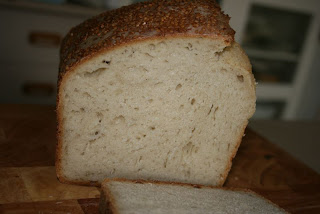 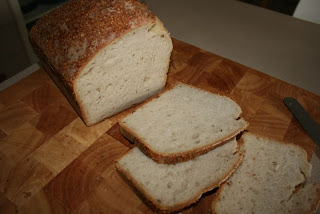 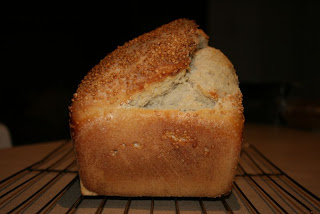 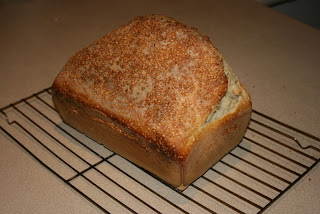 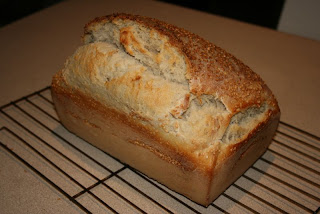 Two comments:
1) you've probably noticed I baked this one in a tin - thought I'd try it out, see how it goes - the shape is much better for toast / sandwiches, but maybe I'll buy a narrower tin, this one is pretty wide, and a higher-but-narrower loaf would be even better;
2) you've probably also noticed why it is sourdough loaves are usually slashed on the top - that oven spring is wicked! :-D

Tastewise, it's nice bread - a bit 'heavier' than commercial bread (this loaf was over 1kg, compared to a commercial loaf of bread that's a bit bigger weighing in at 700g), but with a nice texture and chewy crust. Makes great toast. A very mild flavour on this one, though, not very sour.
Posted by Bern at 10:49 PM 0 comments

Quote of the week

"But [scientific] journals have lots of big words, and lots of small print, and very few illustrations to make it easy for me. You can see why climate deniers don’t like them."

From the enlightening Climate Denial Crock of the Week.

I thought Viscount Christopher Monckton was getting it wrong, I just didn't know *how* wrong...